A little Less LY and a Little More ING

15 Jan A little Less LY and a Little More ING

Posted at 13:39h in A Message From Dawn, Uncategorized by tempadmin 0 Comments
0 Likes
Share 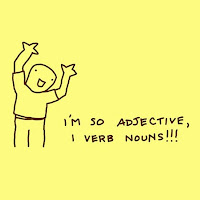 I heard on the radio this morning that there four LY words that people frequently use that  make them appear stuchallenged in the cerebral department, if you know what I mean.  How often do you say  actually, basically, literally, and honestly?

Now, no one is saying your smart tank is running on E just because you use these words.  However, according to the website firsttoknow.com, you may sound like your smart tank needs a fill up if you frequently use these words in your daily vocabulary.
All four words tend to be fillers that could easily be left out without changing your intended meaning anyway.
Actually should only be used when you need to define that something is real. That’s typically not necessary unless you work for Disney or Pixar.
Basically should only be used when you are simplifying something uber complex.  If you’re a teacher, permission is granted to use this word a lot, especially in chemistry, calculus, and anything involving commas.
Literally is a classic.  It should only be used when you want to emphasize something as 100% true.  Saying ‘I’m literally starving’ is far from true.  Saying ‘I’m literally in love with chocolate’ could be what’s wrong with your dating life.
Honestly, I must say, is my favorite.  Do you realize when you say this that people have a hard time knowing when you’re telling the truth?  Should we only believe what you say when you begin with ‘honestly’?  On second thought, it’s sort of like a self-inflicted lie detector test.  That could be useful for the lie-ee, but not the liar.
No doubt the English language is tricky.  But, words are powerful.  The words we choose can make or break someone’s day.   Along the continuum there are filler words, powerful words, and words on steroids (often confused with actions…and rightly so).

That’s where INGcomes in.  For many years, I’ve said that I want to be a verb.  That’s right, a verb.  Verbs denote action.  We like action.  Our donors are action experts.  Action rocks!
Unlike the filler LYwords mentioned above, ING words show that something is happening.  And I always want to be a part of making something really great happen.  Don’t you?
So, use your words.  Go out there and be a verb!  Make someone’s day.  Show what can be a big, cruel world that you’re caring, sharing, and shining.  Maybe you’re donating or volunteering or mentoring.  I even know some who are praying, revolutionizing, and inventing.
ING is highly underrated, but we can change that.  Margaret Mead once said, “Never doubt that a small group of thoughtful, committed citizens can change the world. Indeed, it is the only thing that ever has.”  Literally.
Share
Tweet
Share