Posted at 14:57h in A Message From Dawn, Uncategorized by tempadmin 1 Comment
0 Likes
Share
This past week was a doozy of epic proportions.  Honestly, there were times that I wanted to step outside with a baseball mitt to see if it was even possible to catch a break.  Yet, amidst the chaos, some organized and some not-so-much, I was inspired.
My guess is that you’ve had one of those doozy-kind-of-weeks before.  Maybe you’re even having one right now.  But, take my advice here, below the knee-jerk surface of it all…you’ll find inspiration, if you’ll only look.
So, this week (outlined as any self-respecting Hoosier would outline it), here’s my David Letterman-esque Top Ten List.
The Top Ten Inspirational Nuggets That Got Me Through a Doozy of a Week:
10. The Passport:  1000 Things You Should Do Before You Graduatewas released on Friday.  Check it out on www.mygcpassport.com.  It’s chockfull of experiences all of our kids need to THRIVE.  (I love the word “thrive” and especially love it when it’s referring to our young people.)  Nearly 70 of the experiences that are in The Passport were available at First Friday’s Passport Olympic Village last Friday.  One specific heart-warmer occurred at the Sushi booth…(Try Sushi is Passport Experience #142).  A mom said:  “I knew it!  My whole life I thought sushi would be disgusting and it is!”  Her son said:  “I thought it was great!”  Because of The Passport, this young child got to taste sushi and loved it.  Plus, mom and son experienced it together.  Nice. 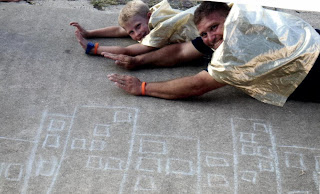 9.   Another Passport Experience, #952, is Take a Picture with Sidewalk Chalk.  With the creativity of some awesome volunteers, there were skyscrapers drawn on the sidewalk with chalk.  The concept was as simple as it was fun. The children would don a Superman cape and then lay on the ground above the chalk skyscrapers.  With the cameraman high atop a ladder, the pictures really did look like the kids were flying over the tops of those buildings.  But, the best picture of the night was the one with the father and son both wearing the Superman capes and both flying over the buildings together as superheroes.  Now that, Mastercard, is priceless.
8.   Did you happen to catch that unbelievable picture from London where the full moon bizarrely floated under the Olympic rings to form sort of a sixth ring?  Brilliant! 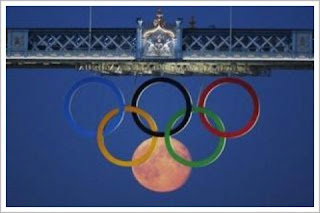 7.   Evan Doyle, intern extraordinaire, ended his summer internship with us this week.  Why do interns always do this?  They come in all bright-eyed and full of ideas and then we throw them into the real-world projects of the Community Foundation.  We work hard and laugh hard, we get all attached, and then they have to leave.  It’s sad for sure, but then you realize that at least you got the chance to get to know them.  Thanks to a grant from Lilly Endowment Inc., we’ve gotten to work with approximately a dozen up-and-coming leaders.  And, one thing I know for sure, they are inspiring.
6.   New school supplies!  If you haven’t smelled a brand new box of Crayola Crayons lately, you just aren’t living. 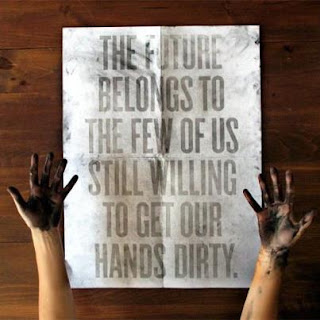 5.   They Synergy 2012 Forum took place last week.  If you’ve ever planned a wedding, you can appreciate the amount of detail that goes into making a big event go from concept to reality.  I spotted this pic (left) on Facebook and can honestly say that it’s encouraging to work with others that know what it means to get their hands dirty.
4.   There was a real live, true blue accordion player in the band at our church on Sunday.  Honestly, there is actually someone that plays the accordion in Grant County!  I don’t know why, but that just made me smile.
3.   Curtis Martin’s induction speech into the Pro Football Hall of Fame was pure wow!  This guy never thought he’d live to see age of 21.  His tragic life story was changed by the game of football.  I was genuinely moved.  And for me, considering he played for the New England Patriots, that’s saying something.
2.  Tamara Barrett and Bethany Kirkwood…Grant County youth gone good.  Tamara and Bethany are passionate young women.  Both are athletic. And, both loved Ramie Harris.  Last year Ramie died in a tragic plane accident and since then Tamara and Bethany have been thinking of a way to honor her memory…and they have. November 3rd of this year, these two ladies will be running a marathon in Ramie’s honor. They’re calling it Runningfor Ramie, they are training now, and they plan to apply any sponsorships or donations to the Ramie Harris Memorial Scholarship Fund.  Check out their webpage if you’d like to learn how to help these two philanthropists honor their longtime teammate and friend, Ramie.
1.   XXX Summer Olympics:  No matter what my last week was like, I think NBC had it a bit rougher.  The criticism of their tape delays, spoilers, and the #NBCFAIL hashtag on Twitter has been brutal for sure.  But, despite it all, the stories of Usain Bolt stopping an interview out of respect for America’s National Anthem that he heard playing in the background or Gabby Douglas so humbly taking the All-Around Gold in gymnastics makes it worth it for me.  Time-delay or not, these are real people with real dedication and real stories…stories that inspire.
But, in the end it’s not about what inspires me…or you.  It’s about what we can do to inspire others.  What can you do?
Share
Tweet
Share