What seems like long ago in a land far away, when our boys were very young, they used to ask before every game, “Mom, who are we versing?” It was so adorable that we never told them that versing wasn’t really a word. It was so innocent that we definitely never told them that they would be versing things all their life—on and off the fields and courts. Which reminds me…yes, I know there was a big game this week. Admittedly, I did not know who was versing who until my friend Mary donned a sporty red jersey on Friday in her support of the ‘non-Tom Brady team’—I think that’s how she put it. And, trust me, even as unsporty as I truly am, my Hoosier upbringing educated me on the wholehearted support of any team playing against New England—which for many years meant Tom Brady specifically. Outside of cheering against the Patriots, my sports acumen basically boils down to (a) clicking on anything I see online about Peyton Manning, (b) enjoying classic John Wooden quotes, and (c) reading any article my friend Jack sends me that’s printed in what he calls ‘the section of the newspaper that I don’t read’. This week he introduced me to Philip ‘Nunc Coepi’ Rivers, and he did not disappoint.

For the sports neophytes like me, Philip Rivers was an NFL quarterback who retired from the Indianapolis Colts in 2020; but he’s so much more than that. In fact, if Rivers and his junior high school sweetheart, Tiffany, both played, they could join their nine–yes NINE–children to form their own football team of 11! So, it’s really no surprise that the teamwork required both at home and at work would need a bit of guiding inspiration—Rivers got his from a 19th-century priest, Venerable Bruno Lanteri. The words? Nunc Coepi. The meaning? Now, I begin. Some may say it’s a mere motto; others a meaningful maxim. But the profound implication of those two words, beautifully married, leads me to believe that it’s less of a motto or a maxim and more of a mindset. A mindset that, if adopted, would serve Grant County well.

While it would be easy to think of Nunc Coepi at the dawn of a new year, Rivers thinks of it as an all caps “Let’s Go!”, like you’d see on the jumbotron before the next big play. In fact, that’s one reason Nunc Coepi was so helpful to him as a quarterback. He said, “As a quarterback, it’s play-to-play. You’re always starting again, whether it’s good or bad.” Sure, his eye was always focused on scoring the next point or winning in general. But he knew the only way to get closer to the end result he was seeking was to keep the Nunc Coepi mindset—always beginning again. I’ve been thinking about embracing the Nunc Coepi mindset all week—and here’s why. 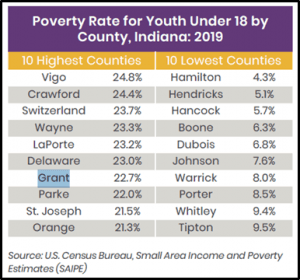 Indiana Youth Institute recently released their 2021 Indiana KIDS COUNT Data Book. This is our annual go-to dataset that informs us how the children in Grant County are doing—specifically regarding child poverty—compared to the statistics released this time last year. It’s usually tough data to review for Grant County because our results haven’t been worthy of our children for decades. Plus, when it comes to most of the poverty statistics in this dataset, we didn’t get there overnight, so we won’t see results overnight either. Fighting poverty isn’t easy work with rapid results, but it’s necessary work. That’s why the Community Foundation, and now our supporting organization Thriving Grant County, has been focusing dedicated time, funding, and attention to the worthy children of our community. With that foundation set, I am thrilled to announce, after spending the past three years as #1 in child poverty in the state of Indiana, we have now moved down to 7th. The data shows that we graduated to 22.7% of our children living in poverty from 31% when the data was released last year. I did the math—not counting the 80 children that moved out of the county—and am happy to report that 1,024 more children are thriving this year than this same time last year. “Let’s Go!”

I used River’s sporty version of Nunc Coepi because it’s appropriate–“Let’s Go!” Like a quarterback heading into a second or third down, we know what direction we need to go, and we also know we’re not where we need to be just yet. Nunc Coepi! The forward movement is worth celebrating! And it’s not solely because we’ve placed a spotlight on our poor child poverty statistic when we first learned the statistic in 2015. And it’s not only because we’ve been laser-focused on this issue ever since. But it is because multiple nonprofits and their donors (including ours!) are all doing their part—Nunc Coepi-ing—one down at a time, progressing toward a thriving end zone. In fact, Thriving Grant County was born out of the abundance of a collective impact model—focused, determined, strategic; everyone doing their part. That’s how you fight systemic issues like poverty and why we continue to seek donations to continue our work in Grant County.

So, in the spirit of River’s words, ‘play-to-play’ and ‘always starting again, whether it’s good or bad’, we’re celebrating where we are today. But we’re also committing the next 12 months to some of the heavier datapoints that still require the dedication of multiple community leaders and organizations in service to beginning with the end in mind, again and again, and again. Nunc Coepi!

While you can view the full dataset for yourself, below are some of the statistics that are most concerning in the current report and where we’ll be spending some time to determine the best next steps to address each: 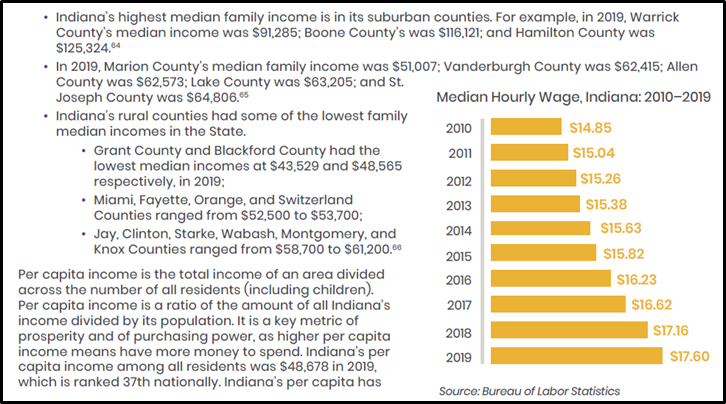 2. Our Average Grade 8 Math ILEARN Proficiency scores landed us in the 10 Lowest Counties. 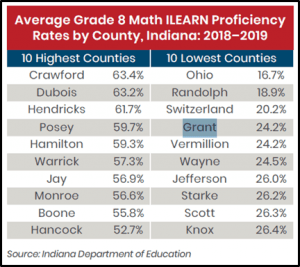 3. We’re top in the state regarding children with food insecurity. 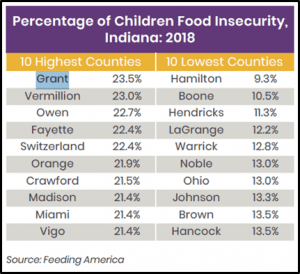 Clearly, if you think our work is done, you’ve got another think coming. And by that, I mean you really do need to think again! Yes, today, we will celebrate progress. But tomorrow we start versing again. And it’s not Grant County versing the state of Indiana or even Grant County versing another County. It’s literally today’s Grant County versing yesterday’s Grant County—our fiercest competition…our former self. We need to do better than we did last week, last month, last year, and even in the last decade. It will take all of us collectively working together, beginning again, each good day and every bad day. Because of our collective efforts, our child poverty rate is the lowest it has been since 2006—15 years ago! Ironically, 2006 was also the same year that Tom Brady was not initially selected to go to the Pro Bowl as a quarterback. Who was, you ask? Well, whaddya know, it was none other than Phillip Rivers himself. Coincidence?  Absolutely!

But what’s not a coincidence are the stories these career footballers have to tell.  It’s impossible to achieve seven Super Bowl wins without that Let’s Go attitude. One play away from a touchdown, Let’s Go! Fourteen points down, Let’s Go! You also don’t raise nine children with skinned-up knees, failed spelling tests, or late-night Science Fair project finishes without Nunc Coepi!  It’s intentional determination. And, I believe, it’s a gamechanger.  After all, 15 years from now, it’ll be 2036 whether we adopt the Nunc Coepi mindset or not.  Just think where we could be with intentional determination. Nunc Coepi!, my friends! Nunc Coepi!