Police to get new polygraph instrument 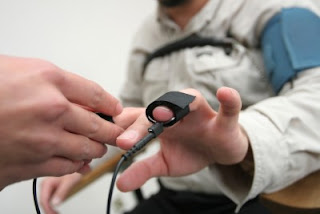 The Marion Police Department is getting a new polygraph instrument to replace the 12-year-old device officers are currently using.  The Community Foundation of Grant County gave the department an almost $3,700 grant to purchase the equipment.

Officers began looking into purchasing a new one after Detective Ben Caudell returned from a 10-week course at Backster School of Lie Detection in late August, said Deputy Chief Cliff Sessoms.  The tool will be more up-to-date than the one they are using now, he said.

Caudell said nothing is wrong with the current instrument, and it is still accurate. The problem, he said, is that the American Polygraph Association and the American Society for Testing and Materials, which set standards for forensic evidence, both require a polygraph to have additional sensors to help with identifying “counter measures” that a person may try to do to cause a false reading.

“Our old unit didn’t have the capability to operate these additional sensors,” he said. “The basic function is the same, but the new one will be more advanced and will help us better identify people who are using counter measurer to change their score.”

Sessoms said Caudell and Detective Sgt. Robin Young are the only two polygraph instructors at the department.

“Robin was the only one left, and we really needed to get somebody else ready for the future,” he said of sending Caudell to the class.

Caudell’s 320-hour course consisted of how to give a polygraph exam and how the test is scored. Sessoms said the class was paid for by the Grant County Prosecutor’s Office.

Since returning from the class, Caudell said he has administered 13 examinations.

“We do a lot of interviews, and we look at verbal and non-verbal communication as part of it and try to identify deception,” he said. “A polygraph takes somebody and puts them in a position where their body physiology helps determine whether they’re being truthful. When watching them, we get feedback from the non-verbal communication.”


The results of a polygraph, along with a confession and other evidence, can give police a confirmation of guilt.

“It builds upon the tools you already have as an investigator in identifying deception,” he said.

In order to give a polygraph exam, detectives must have a good initial investigation, a copy of the case file and the criminal history of the person. In the state of Indiana, a stipulation form is additionally needed, Caudell said. The form allows a person who passes the exam to use the results and the officer’s testimony in court if they are later charged with a crime. Results of polygraph exams are admissible in Indiana courtrooms.

“It’s been a very useful tool,” he said. “Since I’ve been back, it’s been used to obtain confessions in at least one investigation. It’s one more tool to better serve the community.”

The department also uses the device for pre-employment. Every officer candidate must submit to a polygraph examination.

Sessoms said the department wouldn’t have been able to afford the purchase of the apparatus if it hadn’t received the grant.

Community Foundation Executive Director Dawn Brown said the committee saw the value of getting a new instrument for the police.

“Polygraph instruments are kind of like cribs — they run their time limit and then they kind of expire,” she said. “They have to be up-to-date and current.”

She saw getting a new one as a community safety issue.

The Community Foundation gave out several other grants. Brown said the same organizations don’t typically receive funding within the same 12-month or even 24-month period.

“We try to spread the wealth a little bit,” she said. “But, there are needs that have to be met.”

Sessoms said the department received the grant money last week and is in the process of ordering the device.